Once we accept that we always affect a person with whom we interact, we can also realise that there are many ways to avoid clumsily trampling over another’s map and even attempting to re-write it for them.

The map is not the territory

‘The map is not the territory’ directs attention to our experience of ‘reality’ and it applies in various ways. 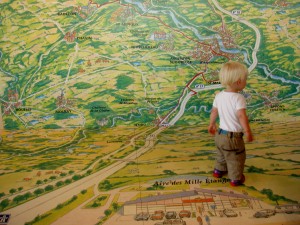 Firstly, we have five senses through which we interact with the world and these senses are limited.  They do not take in everything, e.g. we can not hear a full range of sounds.  This means that the ‘map’ or model that we build of what’s actually out there (or ‘reality’) will always be limited because we do not have a full set of data from which to work.

Secondly, we are limited by the amount of information that we can take in at a time.  The well-known research of George Miller* determined that we can, on average, remember 5 – 9 numbers when we hear them as a list.  Beyond that, we are overloaded and can take no more in.  This experience of overload further affects our ability to have a complete sense of the territory.

Thirdly, even within the range of sounds, sights, smells etc. that we do experience, we each have our own personal filters that allow in only some of the information. The rest is deleted, distorted or generalised as we aim to make sense of the incoming information by filtering for patterns that match our culture, interests, language, values, beliefs, understanding of past and present contexts; in fact, everything we have learned in our lives.

The filtered information is used as a ‘re-presentation’ of a perceived reality that is unique to the individual.

You can see how, just like real maps, each person’s map of the territory has only some of the features of the territory, and will therefore be good for one purpose but not another, and risks becoming outdated if it is not regularly updated.

In summary, we perceive the territory (that is the world and our environment) via sensory input, we process the information by comparing it with our stored experience and we project meaning back out towards the territory and call it ‘reality’.  We then make our decisions based on that and behave in relation to it.  And because it is a constructed reality, we all have a different idea of what reality is.

Take this true story for example: Two people are driving along when one exclaims: “Look at that beautiful tree!”

At the same time, the other says ‘Look at that beautiful sports car!”

The first has not noticed the sports car and the second hasn’t noticed the tree, even though the car and tree are both within their field of vision.  Both of them have deleted what they are uninterested in and both assume – wrongly – that the other person is interested in seeing what they themselves find interesting.

We tend to assume that, because something in our map has a meaning for us, it will have the same meaning for others – and if it doesn’t, then it must be because they are wrong.  When one realizes that the other person is probably doing the same, then it is easy to see how misunderstandings and conflicts arise between people.

So, NLP suggests that it may be useful to keep in mind the concept of ‘the map is not the territory’.

The understanding that another person’s reality makes perfect sense to them makes it easier to treat them with respect and without making judgments or assumptions about them.

This is put to the test when we communicate.  Before talking, there is a further filtering process (deleting, distorting and generalising again) to choose what to say and what not to say.  Then commonly, the speaker talks and assumes that the listener understands exactly what they mean.  The listener also assumes that they know precisely what the speaker means, and paints in all the missing details from within their own map.  Both parties assume that they have communicated successfully – which they may or may not have done – and sometimes it may not matter very much either way.  But at times, the costs of a misunderstanding can multiply if not noticed early.  Being able to make a distinction between your map and others’ maps is a valuable skill if, for example, you want to:

If we could just stop making assumptions, we could distinguish between our own map and those of others, but people are meaning-making beings and assumptions are a vital part of life.

What we can do is become more aware of our assumptions, be aware of the potential consequences of leaping to a conclusion, drop an assumption as soon as we get evidence that doesn’t support it, and keep our assumptions to ourselves.

As we use our maps to navigate the territory of life, we make assumptions about areas where there is no information.  This is a useful skill, much of the time.

However when another person’s map forms part of the unknown territory that we are navigating through, we run the risk of creating conflict if we make assumptions about their map (e.g. that they see the world as we do).  And this is all the more so if the other person is in a vulnerable state, e.g. in facilitator/ therapist – client relationship.

It makes sense then to minimise the need for assumptions by finding out what is actually in each other’s map.  This process of finding out is called modelling.

Modelling others involves noticing their behaviour, listening to what they say and asking questions. In this way we build up our model of their reality.

In classic NLP behavioural modelling, we build a model of someone’s pattern of excellence. We want to get the most accurate model possible, to construct a more generalised model for passing on to others.

When we are modelling someone else, as far as possible we want to keep our own stuff out of the model so that it is a faithful representation of how that person does what they do. We call this being ‘clean’.

Modelling is a great way to work respectfully with someone who wants to change something in their map.  The difference between modelling and modelling for change is that the client expresses a desire for you to work with them to help them to achieve something that they want.  These conditions form the contract between the facilitator and client.

As facilitators we need to be particularly vigilant when change is in the air, because it is so ingrained in us to want to make things right for people, and to make suggestions that we know work every time… in our map.  But if change isn’t going to come from our brilliant suggestions, then where is it going to come from?  The answer is that it is going to emerge organically from the client’s own self-modelling process.  The change that emerges from their system will ‘fit’ their system perfectly.

There are three fundamental parts to being clean:

This kind of listening involves curiosity, rather than listening just long enough to leap to a conclusion.

It also allows the client to enjoy periods of silence for thinking without being interrupted.

Using the Other Person’s Words

Using the client’s own words when describing their experience helps them to stay in touch with their own experience.

It also directs their attention to a particular aspect of their experience, preparing the way for a clean question.

Clean questions request the client to consider particular aspects of their experience, without making assumptions as to the outcome of that consideration and without putting in any of the facilitator’s own experiences.

Clean Language and Symbolic Modelling make it possible to create models of a client’s experience while minimising the intrusion of the facilitator.

Clean Language was developed by David Grove and consists of questions that contain as few assumptions as possible.

Clean Language, metaphor and modelling form the heart of Symbolic Modelling, which was developed by Penny Tompkins and James Lawley.

How to use Clean Language

When we use the word ‘symbol’ below, we mean it in the sense used in Symbolic Modelling.  Symbolic Modelling works with maps, which it calls the ‘metaphor landscape’.  Elements on the map are referred to as ‘symbols’ and can be anything from a word, a feeling or a concept, through to a full-blown metaphor.

The attribute questions ask the client to develop the form of the symbol by exploring its attributes, characteristics or functions.

What kind of x?
Cl: I want to live in a house in the sun
Fac: What kind of house is that house?

This question asks the client to consider where the symbol is in perceptual space, that is, where they have stored the representation. It is often used in a sequence of two or three repetitions to pinpoint the symbol.

Time and Sequence
All events take place in time and space. These questions ask the client to pay attention to the before and after of an event or symbol. They are particularly useful for modelling a sequence or a pattern of repeated behaviour.

There are three steps in asking Clean Language questions.

2. Direct their attention to a part of what they said
Fac: … and when a house in the sun…

3. Ask a Clean Language question about that part
Fac: …is there anything else about that house?

So the Facilitator’s response will be:

By now you are probably aware that there are many applications of Clean Language. Here are some:

Being ‘clean’ in NLP processes

Many NLP techniques make use of a standard metaphor that is traditionally associated with the technique, for example, the ‘Circle’ of Excellence.
Using these techniques, the Practitioner generally assumes that the client shares their understanding of that metaphor and also buys in to it. Some clients do not like the idea of stepping into an imaginary circle. In one instance, the client could not do so because the circle kept moving!

It is possible to use Clean Language to develop a metaphor that suits the client better (while maintaining the essential useful structure of the technique). In this way, the facilitator can guide them in a way that more fully honours the client’s map of the world.

Another example is in the use that NLP makes of anchoring, either the present state or a resource state, or both. Using Clean Language questions to help a client develop a metaphor for a resource state will increase the strength and efficacy of the kinaesthetic anchor that the facilitator uses with the client.

“It is the client who knows what hurts, what direction to go, what problems are crucial, what experiences have been deeply buried… unless I had a need to demonstrate my cleverness and learning, I would do better to rely upon my client for the direction of movement in the process.”

* Korzybski, A, “Science and Sanity” The International Non-Aristotelian Library Publishing Company (distributed by the Institute of General Semantics) l933

*When you tell others about this work, we request that you credit David Grove for his work in devising Clean Language and Penny Tompkins and James Lawley for Symbolic Modelling. See Penny and James’ website www.cleanlanguage.co.uk for many articles on this and related subjects, and for details of their book, “Metaphors in Mind” which is the definitive guide to Clean Language and Symbolic Modelling. We are indebted to Penny and James for their great generosity in supporting our learning and development. They are an inspiration and a model for us both.